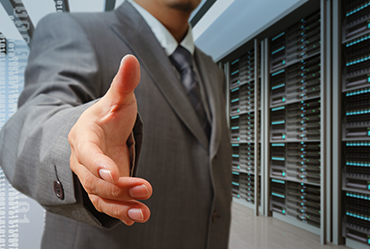 Gottfried Wilhelm Leibnitz developed logic in a formal, mathematical sense with his writings on the binary numeral system. In his system, the ones and zeros also represent true and false values or on and off states.

Kurt Godel developed the incompleteness theorem, in which he showed that there were limits to what could be proved and disproved within a formal system.

Alan Turig and Alonzo Church introduced the formalization of an algorithm, with limits on what can be computed, and a "purely mechanical" model for computing.

During the mid-1970s, IBM developed the VM Operating System (first released in 1972) to provide time-sharing services via virtual machines.

In the 1990s, telecommunications companies, who previously offered primarily dedicated point-to-point data circuits, began offering virtual private network (VPN) services with comparable quality of service, but at a lower cost. By switching traffic as they saw fit to balance server use, they could use overall network bandwidth more effectively

Since 2000 cloud computing has come into existence. In early 2008, NASA's OpenNebula, enhanced in the RESERVOIR European Commission-funded project, became the first open-source software for deploying private and hybrid clouds, and for the federation of clouds.

Our team keeps growing, reach out to us if you are interested in one of our exciting positions

We are a committed group of professionals looking to make a real difference in how technology is used by businesses to drive real impact in our world. See below for our current open positions.

If you feel like you are interested in any of the above positions, please feel free to reach out to us. We will get back to you within 1 business day. We only hire committed people looking to make real impact with the work they do.

We offer flexible work hours, competitive salary that includes commissions and other incentives.